Climate change remains one of the biggest concerns on the planet. Like many other countries, Senegal is committed to the fight against climate change and its repercussions on both humans and the environment.

Global warming, desertification, land degradation, coastal erosion, marine pollution, poor management of urban waste remain major environmental challenges that Senegal is facing. Given the international commitments in the field of the environment, the government of Senegal has made numerous efforts to align the SDGs in its national policies and has provided itself with the means to achieve the SDG13.

– The Emerging Senegal Plan, which aims to be a strategy for stimulating growth till the year 2035, specifically takes into account the environmental aspect. Launched in 2012, The Emerging Senegal Plan mainly aims to: • Promote a green economy in order to guarantee a balance between the development of economic activities and environmental protection • Reverse the trend of degradation of environmental resources and the impoverishment of biodiversity • Encouraging the development of natural resources and biodiversity • Strengthening institutional and technical capacities, improving the knowledge base of the environment • Receiving funding for green jobs

– In addition, the Policy Letter concerning the sector of Environment and Sustainable Development (PLESD), formulated by Senegal, planned for the period 2016-2020 aims to ensure rational management of natural resources and the living environment with a view to economic and social emergence through a trajectory of sustainable development. It emphasizes the strengthening of management capacities of Environment and Natural Resources through the promotion of environmental education and the production and dissemination of information on the state of the environment and natural resources.

The National Adaptation Action Plan (PANA) adopted by Senegal is also in line with the strategies taken by the government to mitigate the effects of climate change. It essentially aims to deal with climate risk emergencies in three priority sectors of the national economy, vulnerable to climate change which are Agriculture, water resources and coastal areas.

-The Great Green Wall Program which aims to combat the effects of climate change and desertification as well as the loss of biodiversity is also part of the strategy taken by the Government to revert the climate change challenges.

– The Nationally Determined Contribution (NDC) which declines Senegal’s quantified commitments in the overall effort to mitigate greenhouse gas (GHG) emissions and adapt to the harmful effects of climate change, within the framework of the Paris Agreement.

– In 2015, Senegal adopted a new National Strategy and a National Action Plan for the Conservation of Biodiversity in order to take into account the necessary integration of adaptation to climate change in the field of biodiversity conservation.

-Facing priority environmental challenges such as floods, coastal erosion, decreases in agricultural production due to rainfall variations and pollution, Senegal, through its ten-year program of flood control (2012-2022 ) with a global cost of 766 billion FCFA over three phases with the third phase from 2017 to 2022 with a cost of 450 billion FCFA, thus intends to contribute to achieving the SDG13 and improve the living environment of its population.

At the institutional level, Senegal has several institutions, which are involved in climate change. Among these are the Senegalese Institute for Agricultural Research (ISRA) and university research centers. The Ministry of the Environment and Sustainable Development, representing the government at the level of the Conference of the Parties, a focal point provided by the Department of the Environment and Classified Establishments (DEEC) and a National Committee on Climate Change which brings together all the actors involved in issues relating to climate change. This National Committee has relay structures which carry out the same missions at the regional level, called Regional Committees on Climate Change. 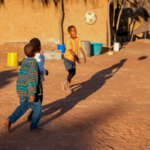